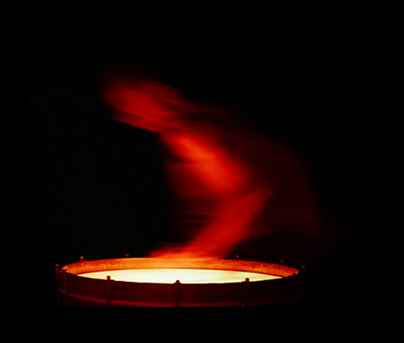 français
The basic of this sound action is to play the sympathies of the room's  resonant structure,  sculpted each time a new according to its architetural  singularity.  The narrative flow remains mutable  to the last moment,   using exclusively acoustic procedures  and methods  of production which are generated by the movements of my body.

My  first  inspiration  to  produce  a   continuous  sound  with  a  percussive  instrument  evolved   through  an investigative  process
of  the  acoustic  qualities  of  the  performance   space.   I  picking  out  various   objects  and  implements  over  travels  tours,
and  in working  residency  I  have  adapted  this  piece  to  be  played on a  large  drum, which  is used as  a  acoustic  amplifier.
I  develop  an  intimate  affinity  with  the  materials  in  vibration.  I  have  to  evaluate  these  vibrations  in  my  body  at  different
levels, to  be able  to  coordinate  my  postures and movements,  but also  like the archer with Kyudo,  tuned the mind to it. For give
life to these vibrations I have used, since 2008, an dextrocentrique circumambulation. These sounds are often compared  to certain  sounds  produced by synthesizers but also to the magnitude that an orchestra can. However, these sounds depends of the reflective
quality of surrounding surfaces, and on the volume of the performance space itself.

These sounds have unusual sonic textures, they escape traditional percussion registers. They test the limits of our perception,  from
infra to ultrasonic, by playing  phase shifts. They insert themselves  into the intimacy  of  matter, through  micro vibration, and we are presented  with an audio saturation by noise density. The flow of these evokes both restraint and excess, immersion and timelessness.